Went to Dayton to work at X-fest, a 12-hour hard rock concert held at the Dayton fairgorunds. About 20, 000 people had to be evacuated in the afternoon when the remnants of Ike hit the fiargrounds at 80 mph. Of course, by that time,many were loaded and not too happy that they had to leave. Not pretty. Wire fell on the fair grandstand and started a fire.
Sorry the pictures are blurry, but i couldn't brace against the wind -- it was wicked! 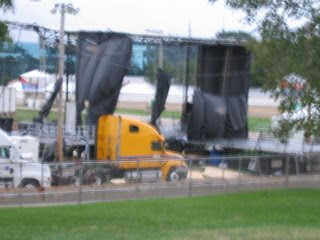 One of the stage backdrops ripped to shreds. 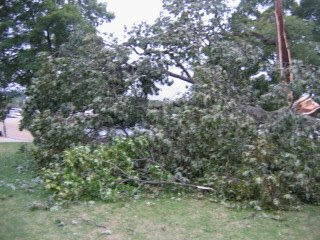 See that silver place, just left of center. It's a car. This guy was so lucky -- he had just got in the car to move it when the tree fell on him, but he was unhurt.
TJay hoped I would come home early, since i was done working by 7:30. Yeah, like I wanted to follow that crap all the way back to Cleveland on a four hour drive. No thanks! I went back the the Marriott and holed up till morning.
They have awesome beds to hunker down in during storms. :)