Took the kiddos to the TJay's Union Christmas party. Brendan 'knows' the truth about Santa. He was, however impressed that Santa had a real beard. But then he told me that Santa really smelled funny. In what way, I asked. Like pee, he replied. I explained that it was from all the little kids that sat on his lap. (I hope...) 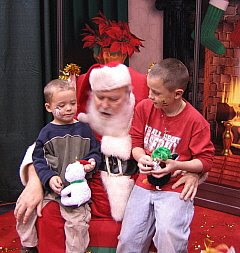 The whole Christmas thing feel rather 'forced' this year. Thank god for the Grand kids... 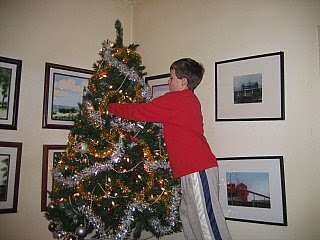 Brendan -- my best helper ever! 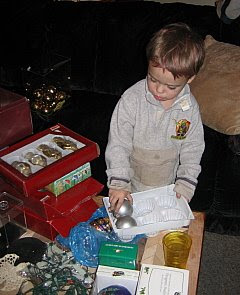 Paulie -- who put up about 20 ornaments...all on one branch!

Posted by Gisela Towner at 7:06 PM No comments:

Seriously have trouble finding any Christmas spirit this year. Last night we had to send my dear, sweet Uncle Ivan to a nursing home.
Last Tuesday, after he didn't show up at Mom's, for her to pay his bills, we found out that he also never made it to his doctor's appointment. Mom tried to go to his house and the storm door was locked from inside. She had the police come and break in. Oncle Ivan was unconscious in his chair, probably for at least 24 hours. He was taken to St. John's, but they couldn't regulate his blood pressure, so they life-flighted him to University Hospital, where they had him in Neuroscience ICU for several days. Now, he seems to have lost the last 50+ years and it's terribly heartbreaking to see him this way.
Two weeks ago he was driving around town, going on bus trips to Mountaineer and Windsor casinos, still going to Union meetings (40 years at Ford Motors), taking care of his lovely house and yard, going to church and flirting with every lady he saw.
Now he's back in Soviet Russia, fleeing, on foot across the Soviet Union and Europe, running for his life, hiding from the Russians and the Germans, with his brother Rischka.

It's so unfair, for him to have to live those horrible times again! Why couldn't he be at a place that he was so happy with his beautiful wife Helga and their son Peter in America? He told me those stories so many times and I always meant to record the stories, so the little ones would know these amazing things about their great uncle. 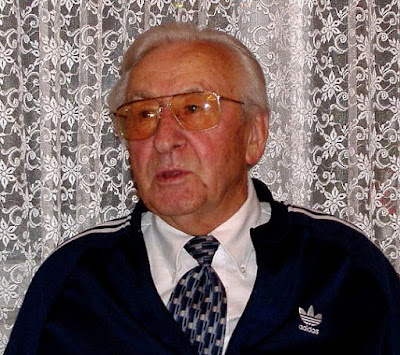 Oncle Ivan last Christmas -- you gotta love a man that wears a shirt and tie with a jogging suit...

I truly do not know how to deal with this. I spent almost 30 hours on the cement floor at PJ's doing the Celtic artwork (previous post). Hard, hard, hard job. I could barely walk for 2 days, when I was done.

Pat and Tommy had a contractor come in and do an acid stain on the unpainted part of the floor and a diamond coat to seal everything. The bastard signed his name to the border of my artwork in 5 inch tall letters with a Sharpie, along with his jackass sidekick, someone who goes by 'Bigfoot." Pat and I tried sanding off the names and I put cement stain over it before the sealant was put on, but Sharpies bleed and you can still see some of it.

What kind of a person would sign their name to another person's artwork?
WTF???
To make it even worse, he's running around town telling people to go see the beautiful artwork that "HE" did on the floor at PJ's. As if that alcoholic POS could keep his hands steady enough...the bastard barely got HIS part of the work done in time because he's so deep into the bottle!

I'm stunned beyond belief. Has this happened to you? Do I have any recourse?
Did I mention that the bastard is my neighbor??
I saw him outside a couple of days ago and he tried to say hello. I put up my hand, looked away and kept walking. I literally saw red, my stomach started churning and it sounded like train was rushing through my head. I'm losing sleep and every time I think of it (which is a lot) I get nauseous. I used to be the most peaceful person -- now this crap is eating me up.
Posted by Gisela Towner at 12:41 PM 7 comments:

My latest canvas is really hard -- as in a cement-kind-of-hard. It a Celtic border around the this basement room at P.J. McIntyre'ss which will be for private parties or a place for a more peaceful pint than the crowd packed main floor of the pub. They also want their logo on the floor and another Celtic knot at the base of the stairs. Now that it's done, my knees and elbows are shot. Ouch. 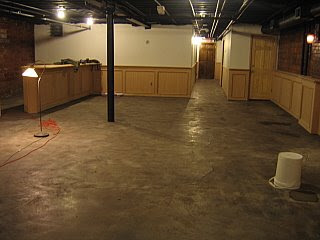 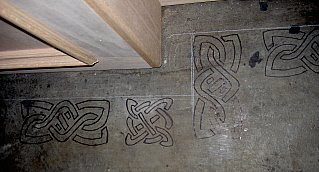 5 inch border all the way around the room and hall. 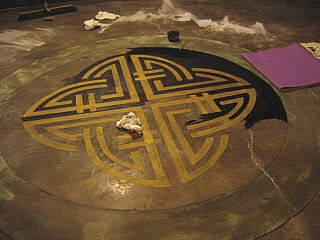 8 foot logo in the center of the floor. To give you an idea of the size -- that purple thing is the folded yoga mat that I used while lying on the floor for 3 days. Ouch. 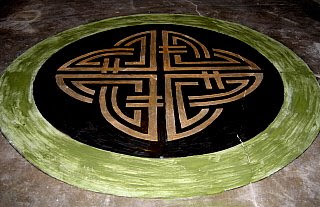 The finished logo -- no quite dry. Done with Smith's cement stains. 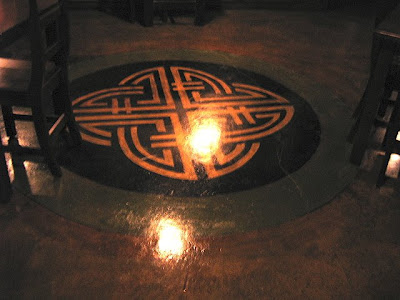 The finished logo, after a contractor applied a diamond coat to seal it.
Posted by Gisela Towner at 12:06 PM 1 comment: